Regardless of my previous experience within different design processes in the past, from the start I realised I had much to discover.

I needed to discover and collect as much information and data about tsunami risk as possible. This sparked an investigation of how tsunami risk affects my community in Tūranganui-a-Kiwa. My Discover phase can be broken down into three main parts:

My research began with an invitation to attend a hui with coastal communities on the East Cape with a group of scientists, emergency managers and experts from NIWA, GNS, JCDR and East Coast LAB. The group delivered a presentation that described a range of initiatives to better understand hazards posed by the Hikurangi Subduction Zone. Some activities include seafloor pressure monitoring, offshore drilling, seismic surveys and others. At this point I had a low understanding of the risk posed by the subduction fault, so this was an excellent opportunity for me to learn through listening, observing and participating in the activities and conversations demonstrated in the presentations. This was where I learnt that Tūranganui-a-Kiwa is home to the shallowest slow earthquakes in the world. This makes the East Coast of the North Island highly susceptible to tsunami risk.
“Slow slip” events are also known as ‘silent earthquakes’ — fault movements that are not felt as they occur over a long period of time e.g. days, weeks, months see Figure 5 (L. Wallace, personal communication, June 22, 2017).

The Hikurangi Subduction Zone is the name for the active condition of the Pacific Plate, as it is thrust beneath the North Island of New Zealand by the Australian Plate’). Currently these two plates are locked, leading to the building up of elastic energy which will eventually be released in future large subduction earthquakes (Wallace, L. personal communication, June 22, 2017). These subduction earthquakes are similar to the ones that caused the Indian Ocean tsunami in the in 2004 and the 2011 tsunami in Japan. Because of the close proximity of Tūranga to the Hikurangi trench, the risk of a major earthquake could result in a “Local source” tsunami which could hit the shores of the East Coast within minutes (Dhellemmes, et al. 2016). Research into the nature of our whenua indicates that Tūranga is highly exposed to tsunami. It is crucial to this research that my community understand this hazard and that it is communicated in ways that are relevant and meaningful.

As I discussed in my Indigenous Knowledge section, narratives are used to explain the interconnections and interrelationships indigenous peoples have with the land. For Māori, ancient narratives can be used to examine tsunami. King, & Goff (2010) talk about written records that tell of destructive waves caused by taniwha that endanger the lives of people in coastal communities. Although taniwha in these stories appear to be hostile, McFadgen (2007) considers them to be neutral and only aggressive when described inpūrakau involving events that kill people or cause damage. King & Goff (2010) talk about taniwha being governed to the laws of tapu. were usually associated with areas of risk and were recorded to give an explanation to natural hazards like a rapid in a river. These pūrakau function as a warning or place to avoid. The experiences contained within these stories fascinated me so much, that I began to look into the history of my own iwi in search of pūrakau that communicated tsunami risk. In my search I came across the well known narrative ‘Te tai o Ruatapu’. This pūrakau talks about how Ruatapu sent great waves to destroy his half brother Paikea after being shamed by his father Uenuku (Taumaunu, 2001). However, as much as I enjoyed researching this pūrakau in academic texts, I felt the need to talk to local people to acknowledge their specific perspectives relevant to their iwi’s understanding of the narrative. I sought to connect with local experts about ‘Te Tai o Ruatapu’ using my own whakapapa connections but found that, because I was still in the discovery stage of my research, I hadn’t laid a strong enough foundation to start building relationships with locals. This may highlight the notion that just because I am Māori and whakapapa back to Tūranga does not mean I will be immediately accepted to research
iwi pūrakau, nor at the right level to understand the process of collecting indigenous narratives. As a result I decided to stay open to the idea of pūrakau but steered towards understanding new narratives that could be developed by a community to understand tsunami risk.

It was important in the Discover phase to understand how my community perceives tsunami risk and risk management in Tūranga. In the Tsunami Awareness and Preparedness report 2015 (Dhellemmes, Leonard & Johnston, 2016) the survey revealed coastal communities on the East Coast of Aotearoa, including Tūranga, had low levels of tsunami awareness and high expectations of receiving a formal warning before evacuation. Quantitative and qualitative data from the Tsunami Awareness and Preparedness Report (2015) survey highlighted that even though residents understood they lived in a coastal community prone to tsunami risk, they were not necessarily prepared for a tsunami situation (Dhellemmes, et al. 2016). 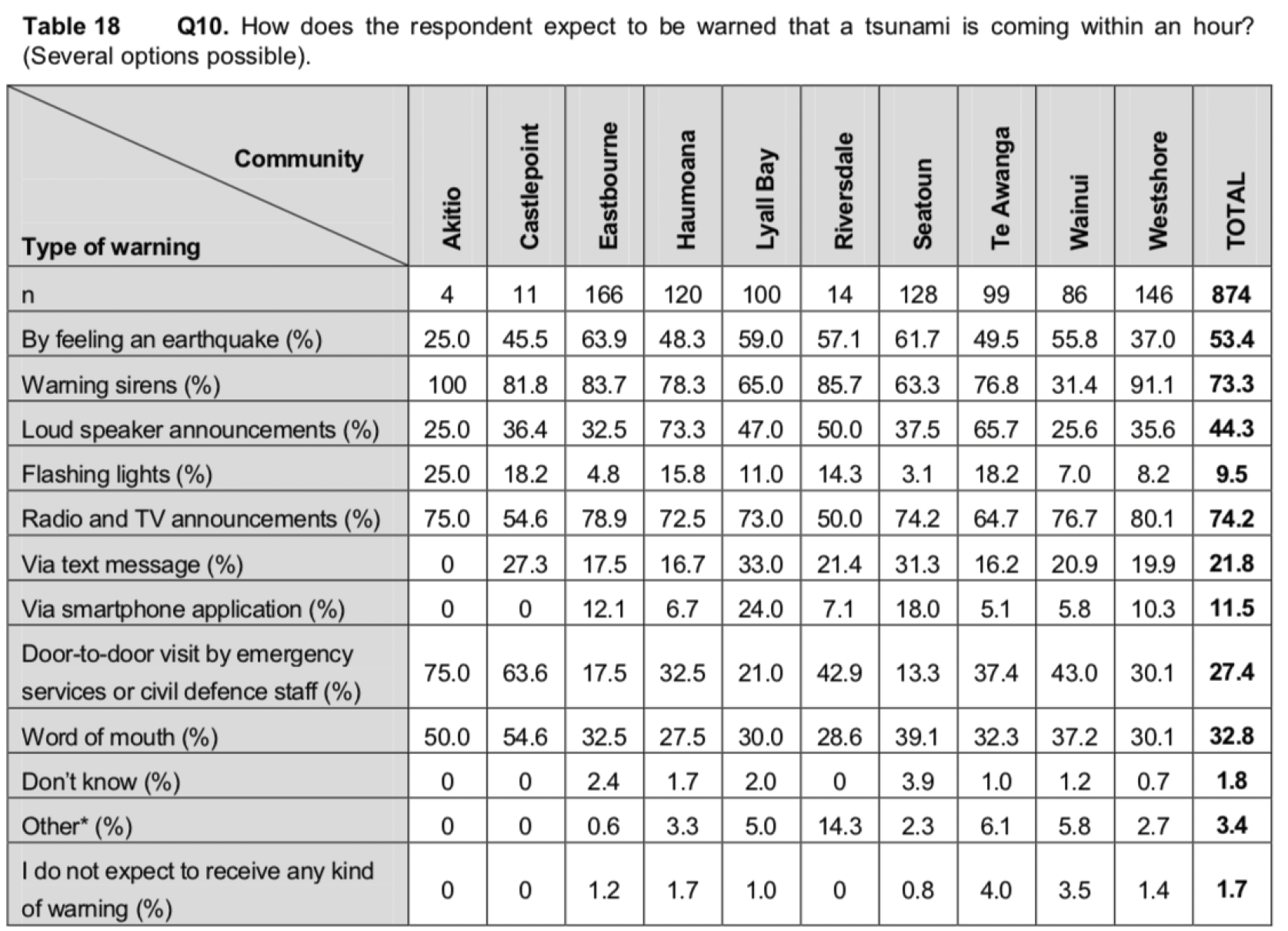 I decided to look at the survey results, in particular the data collected from Wainui, a suburb in Tūranga. In table 18 (see Figure 14) it is clear that a good number of residents expect an earthquake to warn them of a local tsunami, however there is still a large proportion of residents who rely on a mixture of communication methods like radio and TV announcements, word of mouth and warning sirens. I found this part of the survey interesting as it echoes back to risk communication and the different methods and messages used to alert people of an impending danger. The next step of my design process should engage with community residents to uncover their needs and gain insights to address the problem whilst understanding what communication method works best for them.